Established and connected, Ellenbrook is Australia’s most-awarded master-planned new town. Its picturesque location in the Swan Valley, adjoining Australia’s second oldest wine growing region, has made it one of Perth’s fastest growing regions with annual population growth forecast to be more than 6.5%*. Always popular, it is about to become even more accessible with the opening of the Morley-Ellenbrook rail line which will enable residents to
reach the Perth CBD in 30 minutes.

Between 2011 to 2016, the population of Ellenbrook grew by nearly 40%* to 22,678 residents – and it shows no sign of slowing. Residents primarily work  within the trades and Ellenbrook is only a 15-minute drive from the major employment centres of Malaga, Wangara and Midland. The WA Government’s investment in the Metronet line, the biggest
public transport project since the Mandurah Line, shows ‘the prioritisation of Ellenbrook as a major growth area. Currently, homes in Ellenbrook sit well below the Perth median price of $538,000.# However when the train line opens, and makes Ellenbrook and the Swan Valley a fast and seamless commute for workers, prices can be expected to surge. 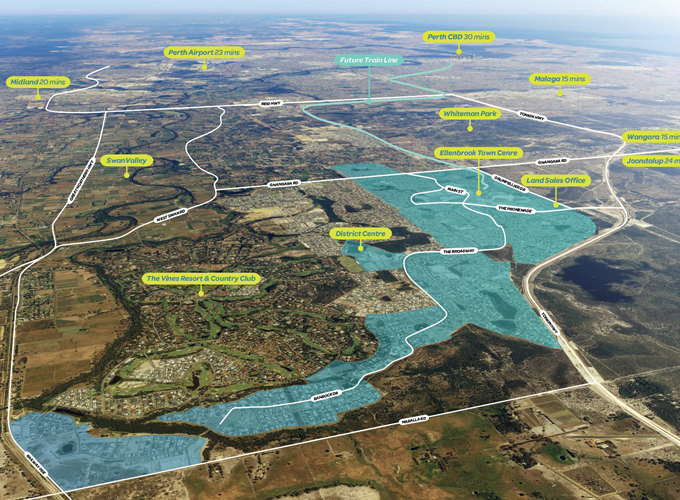 Located in the City of Swan, Ellenbrook is 23km from the Perth CBD. First developed over 20 years ago, it has grown to eight self-supporting villages surrounding a bustling town centre, and covers 13.1 square kilometres. With 87 parks dotted throughout Ellenbrook, the area continues to be a favourite with young families, and 34.5% of residents are under 18*. As 74%* of properties are owner occupied in Ellenbrook, there is a huge rental demand from families for somewhere to live while they build.

Ellenbrook is designed to be a self-sustainable community with employment, education,  entertainment, shopping and community services all within the town. While many residents have no need to leave Ellenbrook on a daily basis, the opening of  the Metronet Morley-Ellenbrook Line will make it even more attractive to those who work in the CBD and beyond.

Ellenbrook delivers the amenity of an award-winning master planned estate, on the doorstep of Perth’s premier tourist destination – the Swan Valley. Residents have a choice of boutique wineries, breweries, restaurants and art galleries, all within a 10-minute drive.

Shopping & Services
Home to 33,000sqm of retail facilities, Ellenbrook Central is the biggest centre in the area and has all the major supermarket and discount retailers. There are also several commercial precincts and numerous retail offerings spread throughout Ellenbrook and its villages.

Schools & Childcare
With 9 primary and secondary schools in and around
Ellenbrook, residents have a choice of public and private education options. Childcare choices are just as plentiful, with 9 early learning and child care centres.

Talk to our team